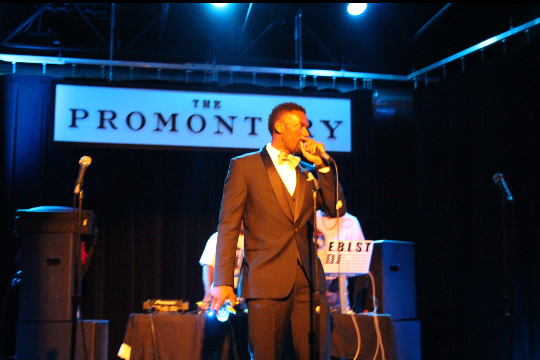 “It’s your favorite entertainer! DoNskI! I’m in the building! Life ain’t nothing but a party!…I represent the Chi and I role with an army!” DoNskI blazes the stage with catchy rap lyrics that perfectly sums up his powerful brand in front of a crowd that truly loves him and supports his accomplishments. On Sunday, August 30th, 2015, Donald Ellis of DoNskI Entertainment celebrated his 10th anniversary as a highly successful party promoter at the Promontory in Chicago. I had an amazing time! The energy was crazy. I was invited to be on the media list by the beautiful ladies of AllINeedIsOneMic.com, who were one of the sponsors for the event. They did an amazing job as usual!

Before Don’s incredible performance, he had a couple local acts such as IAMDON and Ace who charmed the crowd very well and you know Chicago is not easy to please so kudos to them. Comedian Meechie Hall had us laughing in between acts. Later, DoNskI invited his celebrity guests to completely set the stage on fire! The platinum rap group originally from the west side of Chicago, Do or Die came out in full force with hits like “Po Pimp” (Do You Wanna Ride). Do you know I fanned out! lol AHHHHH!!! “Do you want to ride? In the backseat, of a Caddy, Chop it up, with Do or Die…” Hearing them was nostalgic for me. I’m not from Chicago but my Detroit roots appreciated that song too. Belle Isle comes to mind lol.

Speaking of my city, stand-up comedian and actor who was born and raised on the west side of Detroit, Brandon T. Jackson came out to show DoNskI some love!! His funniest bit of the night was when he wanted to recreate the “Straight Outta Compton” stage effect while DoNskI performed his original rap song, “We gonna do this Chi-town style! Straight Outta Chicago right here!…Alright ya’ll, they say we can’t play our music!” Brandon T. Jackson begins in an Ice Cube-esque voice as he looks over at DoNskI with a funny grin on his face.” The crowd laughs and he continues, “wait, I always wanted to do this! So put your middle fingers in the air”. Everyone in the crowd started throwing their middle fingers up. Brandon yells, “DoNskI hit the verse real quick!

You ready? Play it DJ”! The smooth track begins to play,”oooooh baby, baby” and the intro sample of the Isley Brothers’s Between the Sheets, that starts DoNskI’s song, threw off the hard core beat drop that the audience was looking for so the DJ fades out the track while Brandon T. Jackson laughs and says, “Hey, I tried, I tried”. The moment was hilarious and DoNskI was a great sport. He has a great song; we just have to drop a harder beat the next time we try to have a Straight Outta Chicago moment. lol I’m sure there is no feeling like being light-heartedly roasted by a respected comedian that respects the work that you do. Brandon T. Jackson spoke very highly of DoNskI, “He is one of the few black brothers that’s doing it right. You get your money on time, he’s doing the d@#n thing, he puts you up good…so I want you to give it up for another black positive…” and the crowd drowned the rest out with cheers.

What a night! I’m so inspired! I was also able to interview Brandon T. Jackson for the Strong, Empowered, & Classy Project Docu-Series that is coming out this fall!! You don’t want to miss his hilarious yet thought-provoking perspective so keep your eyes open for when the series drops!! Also, be sure to check out his new show that he is starring in on NBC called “Mr. Robinson”, a comedy about a musician turned middle school teacher who’s trying to make the grade.

Don’t miss the next DoNskI Entertainment event! He’s a pro at this! 10 years in the game is nothing to sleep on! Keep partying Chi-Town!!